Have you noticed how many vehicles are being driven down the road in Fuquay-Varina, North Carolina with one or more dents or door dings? It’s probably because they aren’t aware of the great mobile dent removal services that we offer here at Interstate Dent Company. We are the dent removal wizard combined with the convenience of coming to you!

While the dent removal doesn’t take a great deal of time, it does require expertise. We’ve been working on dents since 2001 and have the skill and talent to make the damage unnoticeable so you’d never know it was ever there. Other professionals who do what we do often lack the many years of experience we have, so they don’t get the same results and can’t even begin to tackle creases, which pose no challenge to us. 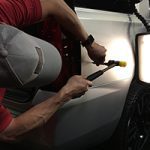 Don’t trust just anyone to be your car dent remover -- call our professional team! If you recently experienced an accident in the Raleigh, North Carolina area, your...
Read More